The Best Places to visit in Agra

The Best Places To Visit In Agra After Taj Mahal

The best places to visit in Agra are mentioned below with a nice description. Agra is the home to magnificent Mughal monuments like the Taj Mahal that speak a lot about Indian history and the way people used to live in the Mughal Era.

In other words, Taj is also called a ‘Dream in Marble‘. Perhaps there are buildings grander in conception and more elaborate in execution than the Taj, in any case, it remains an exquisite piece of lyrical beauty unequaled by any other building in the world.

Taj Mahal was built by Emperor Shah Jahan to enshrine the mortal remains of his beloved wife, Arjumand Banu Begum, better known as Mumtaz Mahal, the ‘Elect of the Palace’. It is said that over thirty-one million rupees were spent on it and also it took 20,000 men to build it in twenty-two years. This incomparable masterpiece, in white Marble, was begun in 1631, a year after the Queen’s death, rising from a terrace overlooking the Yamuna.

However, the Taj Mahal as the name suggests is truly the Crown of Palaces. The surreal view of the Taj showcases the best work of Mughals such as Persian and Islamic architecture. Every element in the Taj Mahal showcases royalty and the immense hard work with which it has been built. The beautiful gardens surrounding Taj make its view even more appealing.

Even though Agra is known for the Taj Mahal but there are so many more places to visit in Agra that people usually tend to ignore.

However, let’s have a look at these Best Places to visit in Agra that will make your trip memorable: 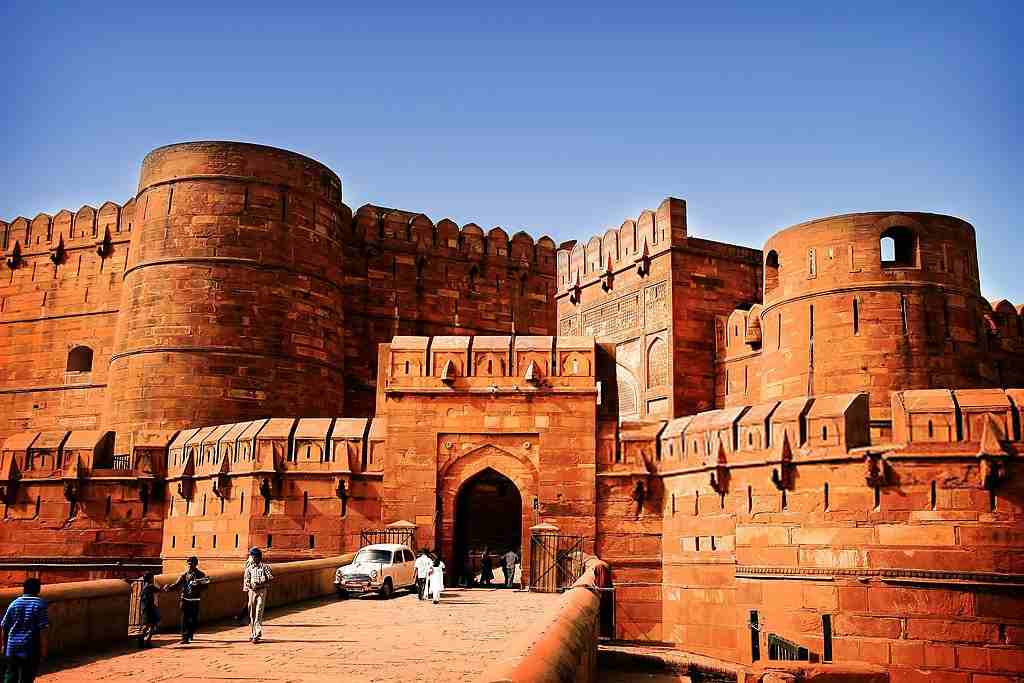 Agra Fort is one of the finest Mughal architectures in India. The red sandstone used in it makes it appealing and gives it a grander appearance.

Apart from the Taj Mahal, Agra has yet is another important place to visit. It is the well-known fort of Agra, built by the Mighty Mughal Emperor, Akbar The Great. A brief history of Agra Fort has already been given in the same work, yet some important buildings of the fort deserve special attention.

To the south of the Agra Fort Station lies the Fort of Agra, on the right bank of the Yamuna, 2km from the Taj Mahal. Many magnificent buildings are situated within the fort, which has a circuit of over a mile. The divider itself is a work of fine engineering and epitomizes such highlights as escarpments, embrasures, and machicolations skillfully intended to give this huge walled-in area and tasteful character.

Agra Fort has the most iconic structures in Mughal history which include Shish Mahal (Mirror Palace), Diwan-e-aam and Diwan-e-Khas, and the Amar Singh Gate.

Did you know that the Amar Singh gate (which has a dogleg design) was originally built to confuse the intruders? And now it is the only point of entry to the magnificent fort, ironic, isn’t it? 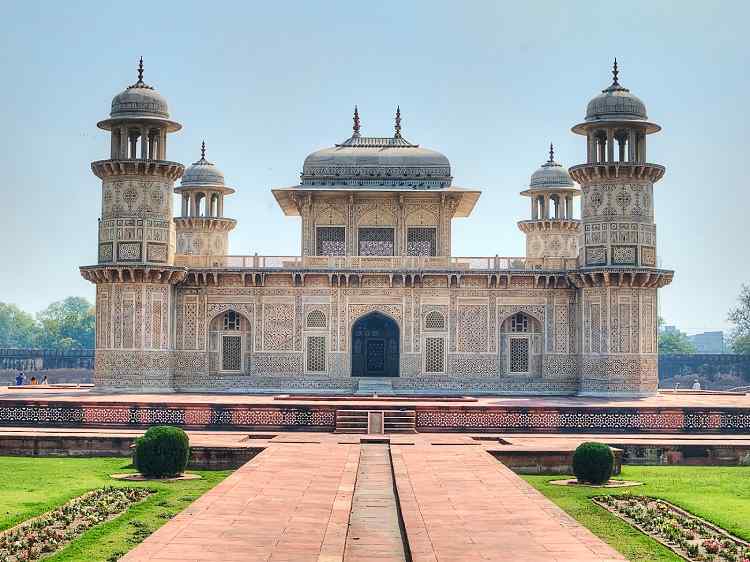 Did you know that earlier every building in the Mughal architecture used to have only Red Sandstones?  The tomb of Itimad-Ud-Daula was built in white marble instead of red sandstone. The tomb is referred to as the “baby Taj” because of the fact that it has the same carvings and cut-out stonework as the Taj Mahal.

Itmad-Ud-Daula is one more beautiful historic building in Agra. It is situated on the opposite side of the river Yamuna, about 1.5km from the city, and was built by Empress Noor Jahan, the beloved wife of Prince Salim’ or Jahangir, in the memory of her father Mirza Giyas Beg, who was the Prime Minister of the Mughal court. It was begun in 1622 A.D and was finished in 1629 A.D.

The surrounding gardens make it a perfect place to sit and relax while you cherish the beauty of the Mughal era. 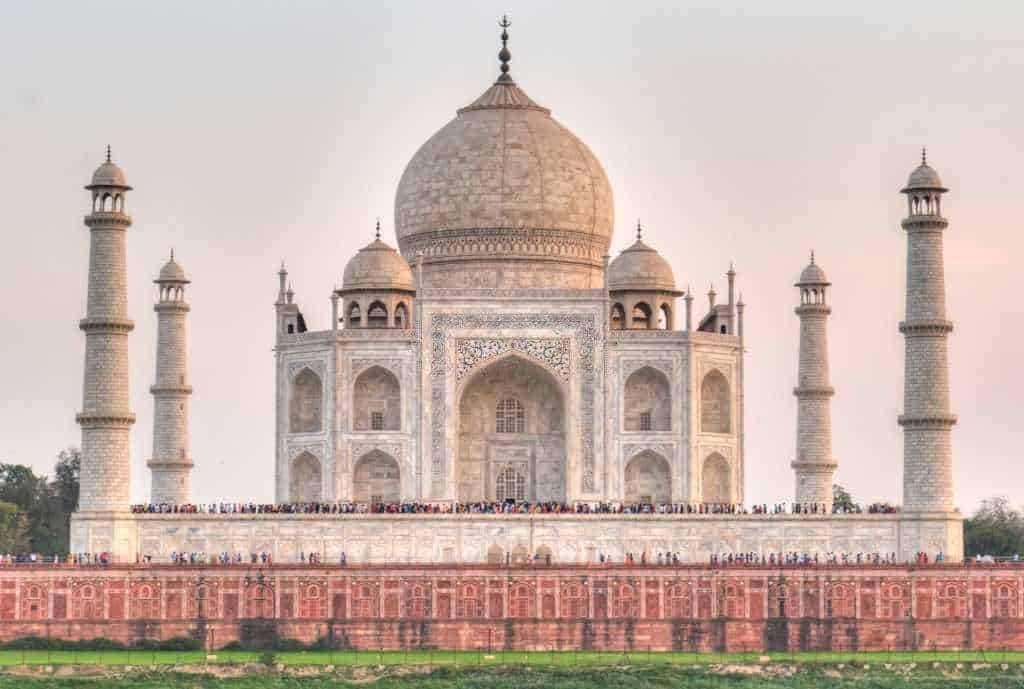 350 years back, when the Taj Mahal was based on the Yamuna’s south bank, an evening glow greenhouse called Mehtabh Bagh was likewise led right over the stream. It was led close by the northern waterfront. The spot was at one time a desert spring with fragrant blooms, concealed structures, wellspring planes, and reflecting pools however it stopped existing in the proper method of history.

Mehtab Bagh consists of 4 Gardens which are constructed just opposite the Taj Mahal.

The view of the marble mausoleum from Mehtab Bagh will leave you awe-struck on the Taj Mahal Tour From Delhi.

PS: The best thing is that you can click hundreds of pictures here! The Taj Mahal at the back makes for the perfect backdrop. 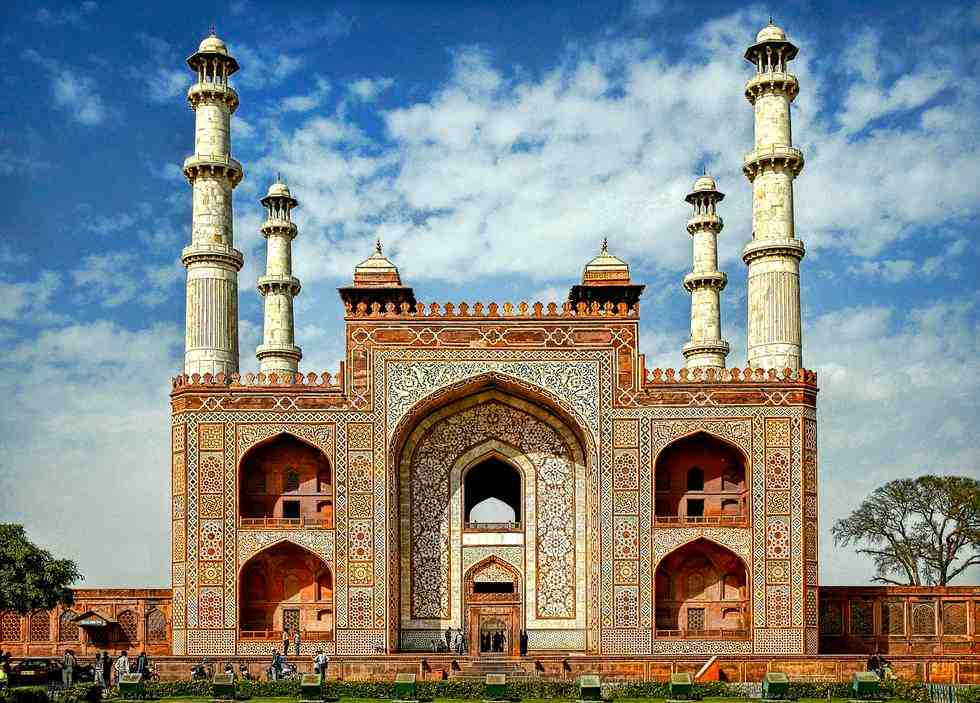 Sikandra is famous for the beautiful mausoleum of Mughal Emperor Akbar. The development of this stylish landmark was arranged and begun by Akbar himself. Be that as it may, Akbar passed on before his tomb could be finished and his child Jahangir finished it. While executing the dream of Akbar, Jahangir made many modifications to the original plan of the building.

The mausoleum of Akbar at Sikandra is just 12kms from Agra. It is easy to reach Agra in a very short span of time.

Akbar’s mausoleum at Sikandra is a unique pyramidal tomb structure. Architectural specifications of the tomb show that the structure is a perfect blend of Hindu, Islamic, Buddhist, and Jain motives that have reflected the spirit of religious toleration, which Akbar practiced during his reign.

A remarkable future of this multistoried building is the presence of three-story-minarets on its four corners. These minarets are worked in red sandstone with staggering trim work of marble. 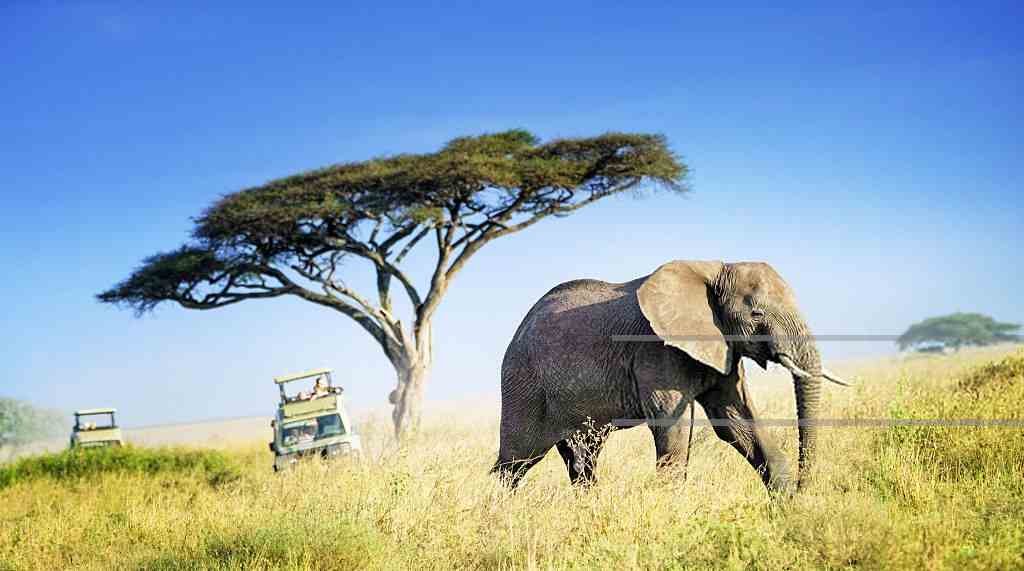 An initiative started to protect wildlife; Wildlife SOS provides shelter to dancing bears, leopards, elephants, reptiles, and too many other animals. This reason alone makes it one of the best places to visit in Agra.

Wildlife SOS offers a personal two-hour pre-booked tour. The guided tour involves a documentary that explains the history of the dancing bears. It is just 30kms from Agra.

Wildlife SOS is open seven days a week and you would have to pre-book your tour. The best thing about SOS is that you can interact with the bears too.

These are the best places to visit in Agra.

Have you visited any of these places? Tell us in the comments below!